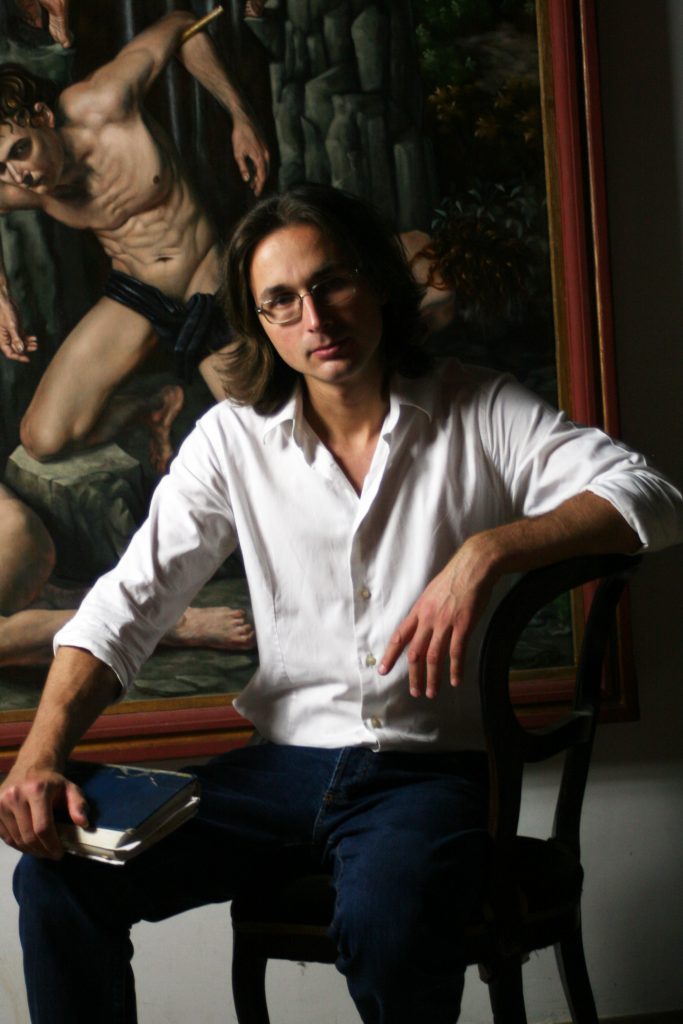 Michelangelo Valenti was born on December 24, 1990, is an Italian figurative painter and sculptor, lives and works in Artena (Rome), graduated from the Academy of Fine Arts in Rome.

As an artist he stands out in the contemporary revival of classical painting, Flemish and Italian art have influenced the choice to continue in the figurative style.

Michelangelo’s passion for art manifests itself from a very young age, at 10,  he attended the atelier “La bottega dell’arte” by Ezio de Rubeis1  where he met various poison artists including prof. Roberto Guidi who encourages him to continue his artistic studies.

He obtained his five-year diploma at the San Giuseppe Artistic High School in Grottaferrata (2008) then at the Academy of Fine Arts in Rome he graduated in painting, first and second level.

In his three-year thesis he discusses: “Alchemy of Painting” (2013). In the two-year degree (2015) Michelangelo proposes to present a documentary dedicated to the works of Igor Mitoraj, a contemporary artist of world renown.

The choice of the thesis on Igor Mitoraj stems from a friendship that is consolidated in the various meetings, and from here, Mitoraj’s promise to be present at Michelangelo’s graduation thesis.

Unfortunately, on 6 October 2014 Mitoraj passed away, but the documentary dedicated to him was proposed with a new, very significant title, “The missed appointment”.

Both before and after graduation, Michelangelo met and frequented various artists, among them: Omero Bordo, called “The Last Etruscan”, for whom he remodeled some of his frescoes at the “Hotel Bluebay Colle della Trinità” in Perugia.

Omero himself gives indications to Michelangelo while he does the work, subsequently the young artist visits the ateliers of the painters Marcelo Bottaro and Giorgio Dante for a short period.

In one of the many trips that Michelangelo makes to Belgium, to Antwerp, he has the opportunity to attend courses on Flemish art, which is why he continues to deepen the pictorial knowledge, methods and technique of the great masters of the past: Pieter Paulo Rubens, Antoon Van Dyck, Jan Van Eyck, Frans Hals, Rembrant, Michelangelo Buonarroti, Leonardo Da Vinci, Michelangelo Merisi, William-Adolphe Bouguereau, John William Waterhouse, Canova, and precisely the study of these, led him to develop his own poetics.

From 2013 to 2017, Michelangelo deepened his sculptural techniques with the artist Fulvio Merolli at the M’Arte2 laboratory where he also made friends with other artists such as: Alessia Forconi and Reinard Pfingst.

To date he collaborates with the M’Arte laboratory.

• 2014: on commission “Portrait of Domenico Giani”, commander of the body of the gendarmerie of the Vatican City state, oil on canvas 85×70.

• 2014: collective exhibition “In the Circle of Moreau” curated by Pier Luigi Berto, Marco Nocca and Roberto Maria Siena, Rome, with the work “The Sphinx”, watercolor on paper, 24×18.

• 2016: collective exhibition “Beauty Will Make Us Free” with the M’Arte studio, at the Institut Francais “Center Saint Louis de France”, Rome, with the pictorial work “The Sacrifice of Isaac” oil on canvas 90×70.

• 2019: collaborates with the sculpture workshop M’Arte, Fulvio Merolli, Alessia Forconi and Reinard Pfingst, in the realization of some sculptural works.

1 Ezio De Rubeis (1925-2014) was an artist and sculptor. His laboratory was located in via San Francesco a Velletri https://www.castellinotizie.it/2014/08/22/velletri-piange-la-scomparsa-del-maestro-darte-ezio-de-rubeis/.

2 M’ARTE Scultura is an artistic laboratory founded in 2002 in Frascati and operational since 2012 in the new Zagarolo headquarters. The artists of M’ARTE are: Alessia Forconi, Fulvio Merolli and Reinhard Pfingst.